A folk festival celebration 25 years in the making deserves the best circumstance! Because we want you to be safe and feel secure about attending, we have decided to postpone the festival until the summer of 2022. If you have purchased passes, please click here for your options to keep, gift, donate or receive a refund.

Local talent performing at the Food and Beer Garden outside of The Zeiterion Performing Arts Center. This stage does not require a wristband. 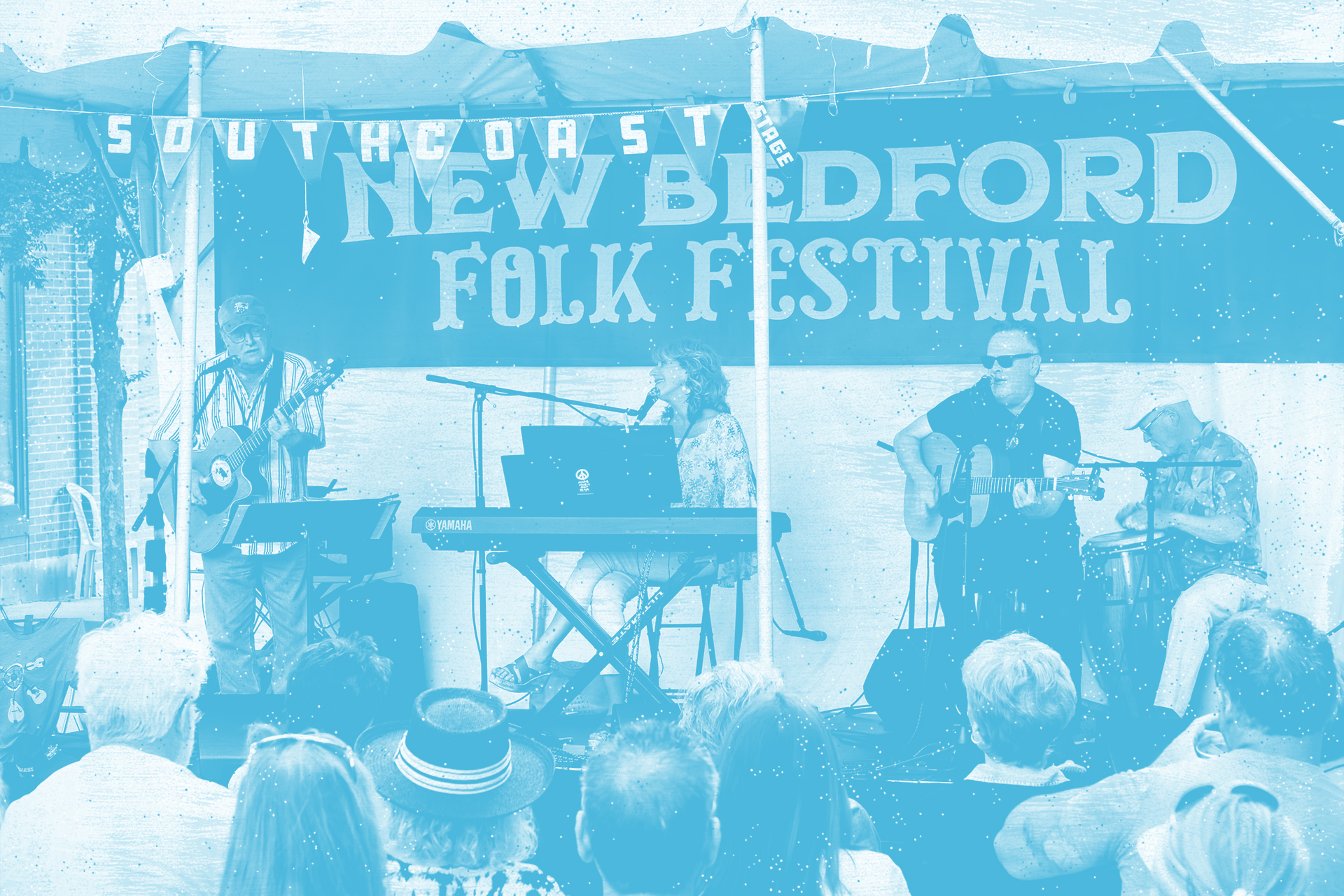 the heart and soul of
the New Bedford Folk Festival

Workshops are gatherings of musicians who seldom, if ever, share the same stage. They combine genres, so the music made inspires and excites both the audience and musicians in ways not experienced at other music events.

Most Folk Festival performers appear in at least one of the two dozen workshops held during the festival. They collaborate on a common theme, like “The Maid on the Shore: Songs of the Battle of the Sexes.” Sometimes the theme is as simple as “Red Hot Music!” As a result, each workshop is a show that you’ve never seen before and will never see again, remembered long after the festival is over.

On our Main Stage, The Zeiterion Performing Arts Center, is the fabulous, New Bedford’s own troubadour, Mr. Art Tebbetts. Also a performer who will be in a workshop, Art has been with us since the beginning. This is his 24th year of hosting the Main Stage…way back when our Main Stage was on the loading dock on the State Pier.

Joining Art Tebbetts on our Main Stage in the Zeiterion Performing Arts Center is Chris Pahud. Chris has worked with Art on Main Stage for a number of years taking last year off to perform at a festival in Switzerland. We are delighted that he is back with us. Chris has been performing on the coffeehouse circuit with his warm bass/baritone voice and acoustic guitar since the 1990’s. Chris will be in a workshop as well as a showcase over the weekend.

A veteran of NPR’s all-music affiliate in Boston, Barnes Newberry brings his love of 60s and 70s folk and folk-rock to WMVY radio. Schooled in the early days of these genres along with the singer-songwriter, country rock and blues movements, he hosts My Back Pages online podcast on WMVY. Barnes returns to host the Custom House Stage along with Nick Noble. Yes, that would be Barnes and Noble!

As host of the weekly Folk Revival on Worcester Public Radio (WICN), Nick Noble honors the great folk music of the past while supporting local musicians today. The winner of the 2015 Pulse Magazine Worcester Music Award for best Radio DJ in Central Massachusetts, he celebrated his 500th show with a live broadcast before a studio audience featuring two dozen local New England artists. As part of the team of Barnes and Noble, Nick returns to host the Custom House stage with Barnes Newberry.

Hosting our Meet the Performer Stage, located in the Seaman’s Bethel on Johnny Cake Hill, Naomi Arenberg has been hosting stages at the festival for many years. Naomi worked for WGBH for 20 years, including a 11 year run at WCAI as host for All Things Considered. Naomi now teaches a course on radio production at Cape Cod Community College as well as being a journalist for Public Radio International’s Living on Earth program.

A licensed acupunturist, Mary Beth’s alternate career is as a performer. She was a third of the group, Tesseract3, along with Joanne Doherty and Joan Akin. MaryBeth now performers as a duo with singer Dave Perreira. Mary Beth has been an important part of the success of the Southcoast Stage. Located on Purchase Street, the Southcoast Stage highlights some of the fabulous talent from the Southcoast. MaryBeth is one of the featured performers and keeps this stage working smoothly.

Our Whaling Museum Stage Host, Chuck is also a featured performer on the Southcoast Stage. Chuck has been appearing throughout New England and in recent years has gone coast to coast with his music. His writing has been gaining notice throughout song circles and he has earned several awards for his finely tuned craft. He has been traveling to coffeehouses, performing arts centers and festivals sowing seeds of his songs along the way.
Copyright New Bedford Folk Festival
All Rights Reserved
X